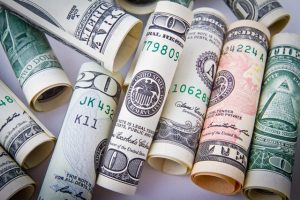 (PenrosePapers.com) For the first time since the mid-2019 scrapping/postponement of the Harriet Tubman $20 bill, the Bureau of Engraving and Printing has revealed that they are planning to alter the nation’s currency. And for the first time ever, they will be honoring a sitting president.

“Ladies and gentleman, the Donald J. Trump $2 billion bill,” said Bureau Spokeswoman Glenda Edmunds as curtains slowly swept open behind her. What they revealed was an oversized bill with a large grinning President Trump at its center. “Make American Grate Again” was spelled out across the bottom, while across the top was the “Two Billion $$$$$$$$$$” domination indicator.

“I know, I’m not a moron like you people,” Spokeswoman Edmunds snapped, her utterance virtually assuring her a presidential promotion. “It will be fixed when we print up a few million of these. That work for you?”

When asked by reporters about the new bill during an impromptu press junket on the 7th green at his Bedminster, New Jersey golf course, President Trump was his usual humble self.

“I know, great, isn’t it? And fitting, so fitting,” the president said. “And did you notice it was two billion, not one? Two billion. Anyone can do one. Two billion. Not that you’ll ever have one, any of you. But I will. Lots and lots and lots of them. Oh boy.”

“You know me, bygones beget bygones and all that. I like Hillary, I really do, despite her cheating and crookedness and ugliness. Despite all that,” President Trump said. “So she gets her own bill, no hard feelings with Trump, right? So she gets hers, too. A two cent bill for a  two cent…”

With cries of “Putt! Putt! Putt!” from staff and security, the press conference was abruptly over and President Trump resumed his game. Which, this publication has learned, was a world record for both overall score and the number of hole-in-ones – 12 – shot on a professional course.

So, what can one buy with a $2 billion bill? It’s not as easy as one might think. Just making change would destroy most small businesses or moderate-sized countries. Super well-to-do numismatists will be in heaven, as will many Trump friends and staffers, who – scuttlebutt has it – will be amply rewarded with the bills, in what insiders are calling “grovel pay.”

And then there’s this news item, which may or may not be related. Several Home Depot stores in the greater Washington D.C. metropolitan area report receiving late night messages on their answer systems from a “John Bannon” seeking information on fencing for a “big, really bigly project, the biggest.” All messages also have one other element in common: the caller asking if each store accepted cash with “…many zeros. Lots and lots and lots of them. Oh boy.”