GOP Elephant to be Sacked in Convention “Surprise” 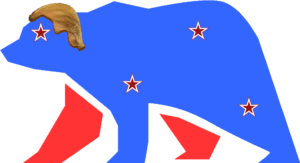 (PenrosePapers.com) Ever since Thomas Nast first used one in a political cartoon in 1874, the elephant has been the symbol of the Republican party. Sources close to the Trump administration say the president feels that 146 years is enough.

As one of the “surprises” the president was promising for his convention, he announced early Tuesday that the iconic GOP elephant would be dropped in favor of another imposing animal figure: the bear.

“From the Chicago Bears to that Smokey Bear that rakes forests to Yogi, the Yo Semite pic-a-nic basket bear, the bear is a symbol of GREATNESS,” President Trump tweeted in the wee hours of Tuesday morning. “An elephant may never forget, but a bear will eff you up so YOU never forget. MAGA!”

Democratic criticism over the decision was swift.

“A bear?” What are they going to do, rent it from Russia?” asked one Democratic Senate staffer.

The actual design of the logo is expected to be unveiled on Thursday night when President Trump gives his primary speech, but rumors are spreading that there are issues with the final design.

“It’s not just the logo, it’s that he wants a real bear on stage with him Thursday. Obviously the bear and the logo are going to have to match,” says one White House insider. “He doesn’t want a brown bear, and he really doesn’t want a black bear, and then he wanted to paint one white and we’re like ‘Oh, like a polar bear,’ and he’s like ‘FAKE ANIMAL!’

“He’s got the vice president and Jared trying to bleach a grizzly over the next couple of days, so… I guess you could say it’s a work in progress.”