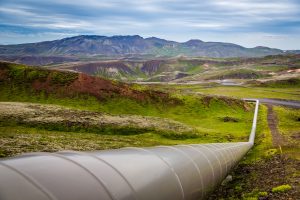 (PenrosePapers.com) With the stroke of a pen on Sunday, President Trump set aside a small section of land in Edinburg, North Dakota and renamed it the North Dakota Black Lake National Park. The designated area is the site of a 380,000 gallon Keystone XL pipeline oil leak that occurred last week.

“It’s a beautiful, beautiful black lake. I’ve seen pictures,” President Trump said after signing the bill establishing the national park into law. “The birds, they love it. They absolutely love it. They bath in it and it makes their feathers shine. A healthy shine.”

Environmental activists were quick to point out that additional oil would have to be regularly added to maintain the depth of the lake. While some estimates place this figure at an additional 30,000 gallons of oil per week – less in the winter months – the White House is downplaying the environmental concerns.

“It’s not like we have to truck the oil in. The pipeline is right there,” says one source at the U.S. Department of the Interior. “Tap the pipe once a week or so, raise the lake level, easy peasy. The carbon footprint to get the oil there is really pretty negligible.”

The bill establishing the North Dakota Black Lake National Park will also set aside up to $3.4 million dollars to create a parking area, nature trails, and an interactive Oil & You: The History of American Industry museum. In addition to petroleum industry exhibits, statues dedicated to influential oil barons, and a wading pool for the kids, the museum will also feature a gift shop selling Trump paraphernalia and commemorative quarts of 10-40 motor oil.