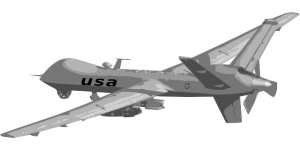 (PenrosePapers.com) President Trump has made a tradition of honoring the extermination of prominent terrorists by inviting elements of the assassination squads responsible to the White House. He kept to that tradition this week when members of the team responsible for the killing of Qassim Suleimani gathered on the South Lawn for a festive luncheon.

Except this time it wasn’t a dog being feted, but something with a whole lot less fur.

“Freddie 5000, come on out here,” President Trump urged as the MQ-9 Reaper drone dipped over the tree line and gently glided to a stop on the makeshift South Lawn runway.

“This is a smart drone, girls and boys. The smartest. I trained it myself, did you know that?” President Trump asked as a laser sight on the drone scanned the audience and recorded faces.

The party played out under partly sunny skies, as hamburders and fries were served. The gathered schoolchildren stared in awe at the 20-meter wingspan drone with its bristling Hellfire II missiles.

Following an awards ceremony – where President Trump supervised the spot-welding of a medal on the flank of the Freddie 5000 – the drone took to the air to show off its aerial skills, which include a missile barrage that took out a Nancy Pelosi-shaped pinata, scattering half-melted candy across the gathered crowd.

The only hitch on the afternoon occurred just after the 45-minute post-awards ceremony anti-impeachment rant. At one point, White House political advisor Stephen Miller handed a note to the president, who read it silently before turning back to the microphone.

“I don’t have any idea what this means, but they want me to say it, so I will,” President Trump said before turning to the drone. “Freddie 5000, I hear you’re looking for, uh, Sarah Conner? You’re looking for her? Well my friend, she’s over there.”

President Trump pointed at the press box as the drone rumbled to life and jumped down the runway.