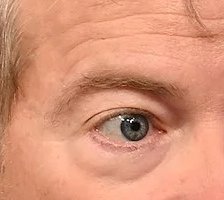 “I looked over and honestly, I thought the man was having a fit or a stroke or something,” Greene recalls. “He’d be all normal like, and then every few minutes when the camera was on him his face would kind of scrunch up and turn all red, and he’d be blinking like a crazy man.”

The “man” in question was Senator Rand Paul, and staffers and others present at the speech are claiming that his spastic fits were actually an attempt to enter the Ukrainian “perfect call” whistleblower’s name into the Congressional record by blinking it in Morse code.

“Oh, it was Morse code,” says one witness to the event who wishes to remain, ironically, anonymous. “I served in Iraq, and before that I got my ham radio merit badge. I know my code.

“He kept changing it up, you know?” the witness says. “Both eyes blinking longs and shorts, then one eye blinking the longs, while the other was blinking the shorts. It was actually pretty impressive, but it must have given him one hell of a headache.”

Was it the name of the whistleblower that Senator Rand was blinking?

“I assume so,” says the witness. “It was definitely a name, which I won’t reveal. That would be wrong.”

Despite it being illegal to do so, it’s not the first time that Senator Paul has attempted to reveal the whistleblower’s name. From questions submitted during the impeachment trial to speeches on the Senate floor to an elaborate Pictionary scheme conducted every time he finds himself in public areas of Senate office buildings, Paul has been relentless in his disclosure attempts.

He nearly lost a censure vote in January when his plan to string 14,000 fairy lights – spelling out the whistleblower’s name -across the front of the Hart Senate Office Building was thwarted. His plan was exposed, ironically, by a whistleblower in the Discount Holiday Decorations Department of an Arlington, VA Walmart.

As for Capitol Security Officer Leonard Greene, he was just glad that Rand Paul was apparently just being a giant douchebag, and was not actually ill.

“I crept up to him, trying not to make a scene or disturb the president, and whispered ‘Senator? Senator? Are you all right?’” Greene recalls.