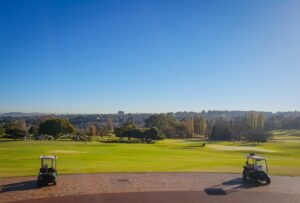 (PenrosePapers.com) President Trump has long bucked tradition when it comes to the various day-to-day routines of the presidency, and his last departure as president from the White House on Wednesday will be no different. Instead of a presidential helicopter, limousine motorcade, or armored column, President Trump has chosen to depart via golf cart.

“It’s a last sort of F.U. to President-elect Biden,” one aide acknowledged as he stuffed boxes and artwork into his Hyundai Monday. “This way he won’t have to ask Biden to borrow presidential cars or planes. It also is a nod to his legacy. Some of his finest accomplishments happened on the golf course, like that one time in ’18 where he wedged a 23-foot shot out of the bunker and sunk it.

“Oh, you haven’t heard about that? Lucky fucking you.”

It’s not just any golf cart, but a tricked-out cart with a cooler, hi-fi stereo system, Trump flag, and deactivated Twitter access that is rumored to reach speeds in excess of 25 miles per hour. It even has a name: Golf Cart One.

“The original plan was to have President Trump, the First Lady, and all the kids leave in a luxury car motorcade complete with tank escort, missiles on flatbeds, ‘We Are The Champions” blaring through loudspeakers. You know, sort of a tasteful/subtle parade thing,” the aide said.

“Then came Sunday, when we woke up to find Melania and her stuff gone, a brief note – ‘Loser husband. Gone to Canada. Be bust. Bye.’ – tacked to her My Pillow. Aaaaaand, change of plans.”

Ex-President Trump intends to spend the next three weeks weaving his way through small town rallies and insurrection planning meet-ups on his way to the Trump National Golf Course Bedminster (NJ), where a model of the Oval Office awaits him in a small house off the ninth green. It is from this power base that he will fight future impeachments, audition super models, and plan his comeback.

And of course, relive the glory days as he putters around Bedminster in Golf Course One, a token Secret Service detail trailing behind.