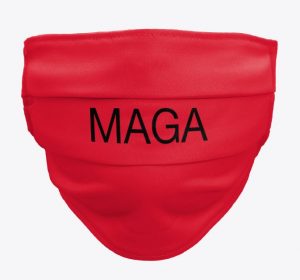 (PenrosePapers.com) People are used to being shocked by what comes out of President Trump’s Twitter account. Still, it was a bit of a surprise when a picture of the president sporting a mask and calling the wearing of it patriotic lit up the Twitterverse on Monday.

Within less than 24 hours, the reason for such an abrupt change of heart became obvious, as revealed in a series of early morning Trump tweets.

“Now, exclusively, from YOUR FAVORITE PRESIDENT, the best masks, absolutely the best, that you will ever wear, ever buy. BARR NONE,” President Trump tweeted at 3:13.

“Layers of cloth, approved by my own task force’s own DR. BLIX, with a layer of bleach soaked – like I said – stuff. Kills everything. Everything.”

From what we’ve managed to piece together from the tweets, these Trump-manufactured masks will be available in a number of categories, each sporting a different set of looks. You’ve got THE ENEMY, which is essentially names in a circle – Sleepy Joe, Crooked Hillary, The Media – with lines through them. This is of course balanced out with US, which is made up of masks with HD images of Mr. Trump, all the Trump kids (Tiffany, oddly, is facing away from the camera), 2A, Sean Hannity, QAnon, and other heroes or icons of the right.

Throw in SLOGANS (“Build the wall!”, “Lock her up!”, “FU China Flu!”), SMART STUFF (“Stable Genious”, “Passed the TEST!”), and AMERICAN MONUMENTS (largely made up of snapshots of the confederate statues that are rapidly disappearing from the south), and you’ve got a mask for just about any occasion. Other categories such as BABY JESUS STUFF and IVANKA THROUGH THE YEARS are also rumored to be in the works.

While no price has been set for the masks yet, the mention of it did pop up in a tweet.

“Not cheap, not at all cheap. But my people, you know you’re getting Trump quality. BEST MASKS. And maybe a freebie with each one, a can of beans, a nice jar of adobobo spice stuff? Who knows, special surprise maybe!”

-Sign up for our newsletter to be notified of all new stories.