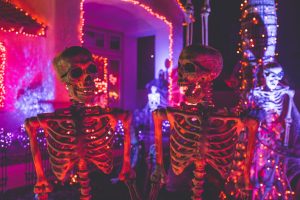 (PenrosePapers.com) When the camera panned over and caught President Trump on the big screen at Sunday’s World Series game, it appeared that many in the attending crowd started to boo.

Yes… and definitely no, says the White House.

“Those weren’t boos, pinhead,” says a White House source who requested anonymity in the event she wasn’t disparaging enough to the press. “You know what Thursday is, right, idiot? Those were Halloween cheers, and the president thanks every one of his devoted subjects who wished him a Happy Halloween in this special way. Boo to you too, Real Americans! Boo! Boo!”

The spin has already filtered out to several prominent Republicans, who spent the early part of Monday festively booing each other on Twitter.